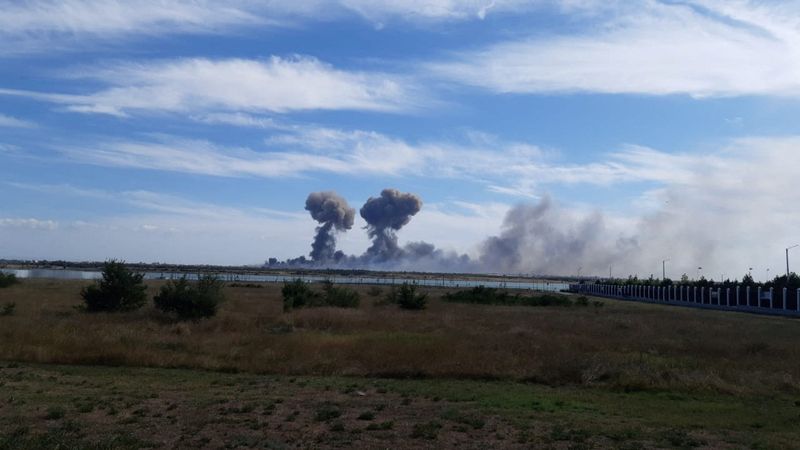 © Reuters. Smoke rises after explosions were heard from the direction of a Russian military airbase near Novofedorivka, Crimea, in this still image obtained by Reuters August 9, 2022.

KYIV (Reuters) – Satellite pictures released on Thursday showed devastation at a Russian air base in Crimea, hit in an attack that suggested Kyiv may have obtained new long-range strike capability with potential to change the course of the war.

Pictures from independent satellite firm Planet Labs showed three near-identical craters where buildings at Russia’s Saki air base had been struck with apparent precision. The base, on the southwest coast of Crimea, suffered extensive fire damage with the burnt-out husks of at least eight destroyed warplanes clearly visible.

Russia has denied aircraft were damaged and said explosions at the base on Tuesday were accidental. Ukraine has not publicly claimed responsibility for the attack or said exactly how it was carried out.

Separately, the two sides accused each other of shelling the Zaporizhzhia nuclear atomic power plant again on Thursday, days after trading identical accusations that raised international concerns that the deployment of weapons there risked triggering a catastrophe.

U.N. Secretary-General Antonio Guterres early on Thursday called on both sides to halt all fighting near the plant – Europe’s largest – held by Russian troops and operated by Ukrainian workers and near the front line in the fighting.

Ukraine’s Energoatom said the complex was struck five times on Thursday, including near where radioactive materials are stored, but nobody were injured and radiation levels remained normal.

Reuters could not independently verify the battlefield reports.

Referring to the damage at the Saki air base, Ukrainian presidential adviser Mykhailo Podolyak said there were “numerous scenarios for what might have happened.”

“Officially, we are not confirming or denying anything… bearing in mind that there were several epicentres of explosions at exactly the same time,” he told Reuters in a message.

Western military experts said the scale of the damage and the apparent precision of the strike suggested a powerful new capability with potentially important implications.

Russia, which seized and annexed Crimea in 2014, uses the peninsula as the base for its Black Sea fleet and as the main supply route for its invasion forces occupying southern Ukraine, where Kyiv is planning a counter-offensive in coming weeks.

“I’m not an intel analyst, but it doesn’t look good,” Mark Hertling, a former commander of U.S. ground forces in Europe, wrote on Twitter (NYSE:), linking to an image of the devastation at the Russian base.

The Institute for the Study of War think tank said Ukrainian officials were framing the Crimea strike as “the start of Ukraine’s counteroffensive in the south, suggesting that the Ukrainian military expects intense fighting in August and September that could decide the outcome of the next phase of the war”.

Exactly how the attack was carried out remains a mystery. Some Ukrainian officials have been quoted suggesting it may have been sabotage by infiltrators. But the near identical impact craters and simultaneous explosions appear to indicate it was hit by a volley of weapons capable of evading Russian defences.

The base is well beyond the range of advanced rockets that Western countries acknowledge sending to Ukraine so far, though within range of more powerful versions Kyiv has sought. Ukraine also has anti-ship missiles which could theoretically be used to hit targets on land.

Ukrainian Brigadier General Oleksiy Hromov, said Russia had doubled its air strikes on Ukrainian positions since last week, but that the intensity of Russian airborne activity in the south had reduced after the destruction at the Crimean base.

“As a result of the specified actions, the intensity of use of aviation on the southern front has somewhat decreased,” he told a news conference.

Ukraine drove Russian forces back from the capital Kyiv in March and from the outskirts of the second-largest city Kharkiv in May. Russia then captured territory in the east in huge battles that killed thousands of troops on both sides in June.

Since then front lines have been largely static, but Kyiv says it is preparing a big push to recapture the southern Kherson and Zaporizhzhia regions, the main slice of territory captured since the Feb. 24 invasion that Moscow still holds.

Russia has reinforced those regions, but its defence depends on supply lines to stock forces accustomed to firing thousands of shells a day.

Kyiv hopes the arrival last month of U.S. rocket systems capable of hitting logistics targets behind the front line could tip the balance in its favour. But so far the West had held off on providing longer-range rockets that could strike deep in Russia itself or hit Moscow’s many bases in annexed Crimea.

Russia says its “special military operation” is going to plan, to protect Russian speakers and separatists in the south and east. Ukraine and its Western allies say Moscow aims to solidify its grip on as much territory as possible.

Tens of thousands of people have died, millions have fled, and cities have been destroyed.

On Thursday Russia turned down an offer by Switzerland to represent Moscow’s diplomatic interests in Kyiv, saying the Swiss were no longer neutral because they had joined sanctions against Russia.

Ukraine reported Russian bombardment along the entire front line, from the area around Kharkiv in the northeast, across eastern Donetsk province, and on the banks of the wide Dnipro river in Zaporizhzhia, Kherson and adjacent provinces.

Ukraine accused Russia on Wednesday of killing at least 13 people and wounding 10 with rockets fired from the vicinity of the Zaporizhzhia plant, knowing it was too dangerous for Ukrainians to shoot back.